Spotlight on a partner

MyJustice is supporting ActionAid Myanmar (AAM) and its partner organisations at the community level to identify and respond to long-term justice needs of women in rural and urban settings. The project employs three key strategies: (1) empowering women and girls to claim their rights through community-led support systems; (2) providing quality, holistic and client-centric legal aid services to survivors of violence through a well-established referral system; and (3) utilising evidence to influence national policy reform and implementation. The project works towards bringing about transformative change by supporting legal aid service providers, strengthening institutional responses and creating awareness within communities to bring about a shift in attitudes and beliefs. Below are snapshots from this project. For further information please contact ActionAid Myanmar: http://www.facebook.com/ActionaidMyanmar/

ActionAid Myanmar uses a transformative approach with men as role models to decrease violence against women and raise awareness and suggest alternative gender norms. The programme supports men to talk to other men using peer education approaches. We share here some personal narratives from men who have participated in this initiative.

AAM trained 30 men as role models in Hlaingtharyar, a satellite township in Yangon, to be active change agents in their communities. They were equipped with knowledge on equality, gender-based violence (GBV), endemic social attitudes surrounding gender, patriarchal power structures and positive masculinity. By improving their knowledge on these issues, the programme helps them address inequality in their own communities. 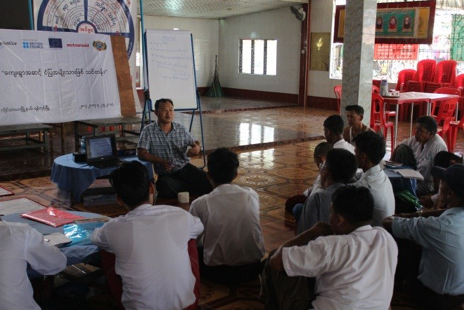 U Myat Tun has been engaged as a male role model since the beginning of the project.  He feels that power imbalances, gender discrimination, lack of educational and inequality compound GBV. He feels that the lack of awareness on the laws surrounding violence and discrimination is a significant barrier in enabling survivors of violence to seek justice.

U Myat Tun feels that as the country is dominated by a patriarchal culture, men should take responsibility for reducing violence in societies and help create a safe space for women.  U Myat Tun is a passionate volunteer and feels, “there is a need to promote justice in every part of the country. I truly appreciate people who are a voice for justice and all survivors of violence.”

The Mon Women’s Organization (MWO) trained 24 men as male role models in Mon State. The training aims to promote the engagement of men through a peer education approach that uses the role models at the centre.

Nai Bayar Chan Sen has participated in the male role model training since April 2017. He was recruited by a youth leader in his village as he was interested in learning more about gender-based violence (GBV), concepts of gender and how to support violence survivors.

“I am most passionate about raising community awareness on the law and the consequences of violating it.  I am motivated to end gender-based violence in my community. I am trying to raise community awareness by inviting other men to talk about this issue. I also share my knowledge with members of my community. When there is a GBV case in my village, I encourage the survivor to go to court in order to access justice. Most community members believe that they cannot pursue a court case without money. They face pressure to solve issues at the village level. We are trying to discourage this practice. I also support members of my community to understand the laws around land ownership by connecting them to our legal officer.”

Mon Women’s Organisation (MWO), in partnership with ActionAid Myanmar (AAM), has trained 12 women paralegals from Thanbyuzayat, Ye and Chaung Zone Townships in Mon state. The training has enabled them to gain a better understanding of the laws related to gender and women’s rights in Myanmar as well as develop an understanding of the services that MWO offer to survivors of gender-based violence (GBV).

We met Mi Onjeezali Chan, a paralegal since May 2017. She spoke to us about what becoming a paralegal meant to her and what motivates her to support members of her community to access justice.

“I enjoy conducting awareness-raising sessions in the community the most. Before the training, I didn’t know much about how the law functioned, but after, I felt that I gained so much and could confidently speak out for gender-based violence survivors. I have been able to give similar paralegal training to other members of my community. I am motivated to be a paralegal as, in my village there is no one else working on this issue and I would like to protect other women, including myself, through the use of the law.’

Mi Onjeezali Chan spoke about some of the constraints she faces as well. “In our small community, a violence case involves people I know personally, and there are two sides to every story.  As a paralegal, I am dedicated to helping those who are victims of violence, so the perpetrators become angry with me. They spread rumours about me and report me to the village administration office. This has happened twice, but I was able to get through it with the support of my mother.”

Daw Tin Myint Win is a community paralegal in Hlaingtharyar Township, Yangon, first trained by ActionAid Myanmar (AAM) in 2016. She is also a member of the Myanmar Women’s Affairs Federation (MWAF). She has received four trainings conducted by AAM, which have equipped her with the confidence to handle many types of cases, from the straightforward to complex. 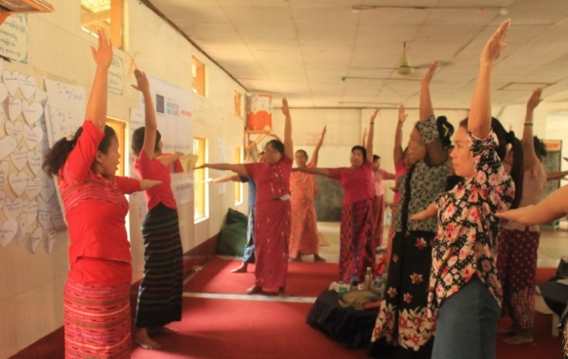 “ln my trainings, I have learned about the different forms of VAWG and gained valuable legal aid knowledge. The trainings built up my knowledge on women’s rights, referral pathways and key service providers which are available for survivors of violence.

To date, I have handled ten cases that have been referred to different services. Dealing with the cases particularly on domestic violence, I informed and transferred the cases to the ward administrators and the chair persons of MWAF for further consultation.

Earlier, I didn’t have the confidence to confront these issues in my community, but now I have the knowledge and understanding to be able to speak out. Even if the issues are intimidating or controversial, I am not fearful to face them now.” 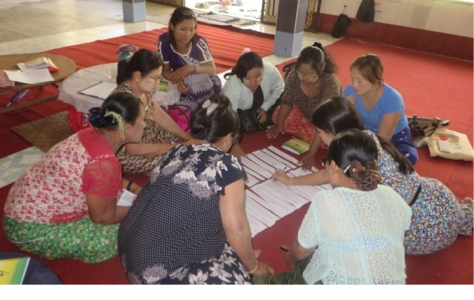